Many years ago Lev Vygotsky, a Russian psychologist and avid observer of children’s play, wrote that at play a child “behaves above his daily behavior … as though he were a head taller than himself.” Lev Vygotsky’s observations on play juxtaposed with Hungarian psychology professor Mihaly Csikszentmihalyi’s (founder and co-director of the Quality of Life Research Center, USA) research on flow makes for a heady synthesis of what is and can be when children play.

Angelique Felix, mother of 5-year old Chanel, a practitioner & proponent of play with whom I have spent many hours discussing and learning about play explains, “At play, children experiment with that what they encounter in their daily lives: fears, pleasurable moments, routines etc. While the children play, they do it in their way. They put their truth in play. And we adults can understand in these moments the unspoken words of our children, by just observing them, without judgment. In free play, when there is no adult agenda, children follow their inner creativity, their source of inspiration.” A ‘play fairy’ weaving magic of play into the lives of children and adults, believes, “I call play the best possibility for children to be themselves.”

Children absorbed in self-directed play exemplify flow of liberating energies. The engagement with the act and objects of play is so complete and consuming that the world and clocks cease to exist. That perhaps explains why adults pack up instantly when it is time, but kids want to prolong their activity with complete disregard to time.

Over-involved adult can disrupt this flow during a child’s play. The well-intentioned adult could interrupt flow during play by “helping” with the difficult or “dangerous” parts; with unsolicited advice; by rushing him along so that he moves along the routine in a timely manner or praise his work in ways that would shift his attention away from the process and toward the product.

What follow are pictures of what I call, The Battle for the Bowl where two and a half years old, Raju (name changed) in a daycare setting spent his half an hour defending his way of painting: 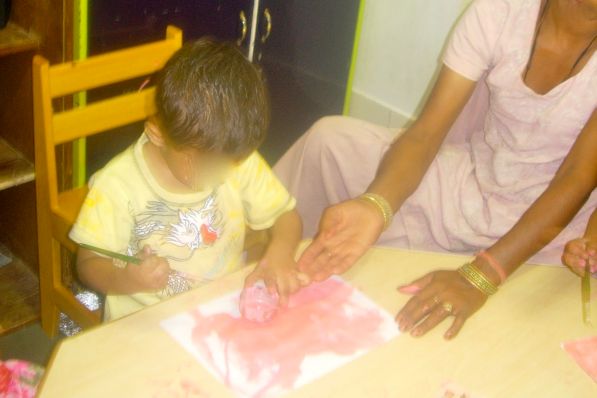 Raju pours the paint on the paper

Teacher puts it on the side again

Raju puts it back in the front 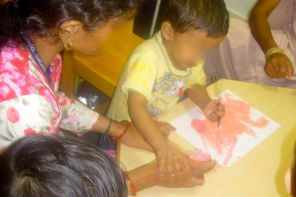 Teacher puts it on the side to “make it easier”

Raju begins painting with bowl of paint far away in front

Raju is back to paint

Raju walks away to share with intentions of returning to paint

Raju is prevented from painting on “others” work

Raju decides to join his friends

Raju examines a paint brush as others paint

Would he have created a Picasso or a Rembrandt- certainly not; would he have transitioned into flow- probably; would he have expressed his mental processes and physical dexterity on the large canvas of his learning and development?  I leave that to your wisdom and imagination.